Writing Girl Beneath Stars has been a very different experience from writing Girl Behind Glass. Firstly, hopefully, I know a little more about the writing process.

I started writing Girl Behind Glass back in 2011. I had a particular scene, and a concept in mind, but little else. I had already attempted and discarded the concept a few times before, but I decided to plunder along and see what happened. It was over a year before I showed anyone the first draft. And then, it took another year before it was ready to publish. Once I published, I quickly realised that it wasn’t ready. I wasn’t ready. There were so many things I was yet to learn, so many mistakes I had made, but I do not regret it. If I had waited, it would have never happened. Pressing that ‘publish’ button was terrifying–and obviously before I was ready–but if I had not done it, I would still be sitting here, typing away on my computer, filled with self doubt and a longing to attempt something which I didn’t think was possible.

The first scene I pictured was the one when Bracken comes into the Mudder’s camp hurt and injured. Both he and Willow had no name, no background, I only knew that he loved her, he had bloodshot eyes because of something–I wasn’t sure what–and that she was torn. The rest came as I was developing my world behind the glass.

Nuovo was inspired by a muesli bar wrapper. Strange, I know.  My children’s school had sent home a notice informing parents that to reduce rubbish, all food in wrappers needed to be sent to school within a resealable plastic container and removed from their wrappers. All in the name of the environment. I ignored the notice, but I started thinking about a world where the environment, the planet, had become more important than the people, and where people were kept separate from nature in order to preserve it. 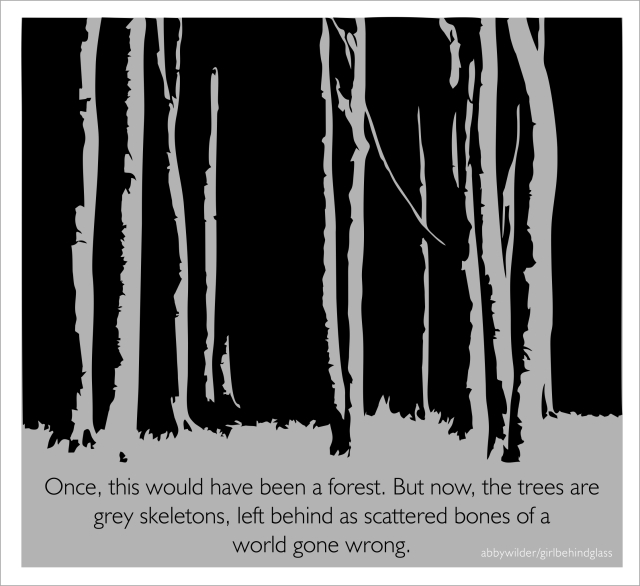 But with most things, the power that it offered those in control was too much to resist, and what started out as good intentions, soon twisted. My world was supposed to be background to the plot of the story, but the more I delved into it, the more enamored I became with the concept. It became less outlandish, and when I started doing a little research, I discovered that a nutrition based food supplement already existed. My ‘nutrition pills’ weren’t as far fetched as I thought. (To find out more about this see soylent.) In fact, I decided to name my pills after the developer as a nod to some distant relation to the concept.

Girl Behind Glass was supposed to be my practice story, a one off that I wasn’t too invested in. But the more I worked on it, the more attached I became. You can’t spent that much time with people–fictional or otherwise–without developing some strong feelings. So soon, Willow, Bracken, Luke, Devon, and the rest of the characters, became a part of me, and the story I was to practice on turned into something I was excited about.

It was supposed to be a one off. A standalone novel. But when I wrote Boy In Uniform as an extra to the story line, the characters evolved in my mind, and the next story started to emerge.

Willow was changing. In Girl Behind Glass she is unsure of herself and her place in the world. When she discovers that life is not as she has been led to believe, she is left shaken. In Girl Beneath Stars, she begins to discovers herself and what she believes in. She’s confronted with different ideals and she must decide who she wants to be.

It is supposed to be the conclusion to the series, and it is the conclusion to Willow’s story, but already another story in the same world is piecing itself together. It won’t be the next book I write, in fact, I may never write it, but the idea is there and one day I may see where it takes me.