While my designer and I were coming up with the concept for the Girl Beneath Stars cover, I decided that Boy In Uniform needed a revamp. As it is only available as an e-book, and just a small companion story, I was yet to get the cover professional designed. The cover which it did have was focused on the symbol on Bracken’s pistol. But because both Girl Behind Glass and Girl Beneath Stars features Willow, I though it only fair for Bracken to have his own face on the cover. It features Bracken’s red eyes, and depicts him as if he is reflected in a mirror that has cracked. I felt this kept in line with the ‘glass’ theme of the GBG, as well as giving insight to the way Bracken felt. 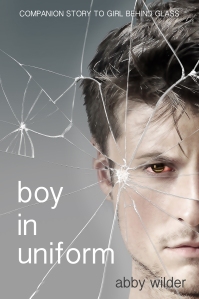 The new cover has been uploaded to the various distribution sites but it will take a few days to appear.