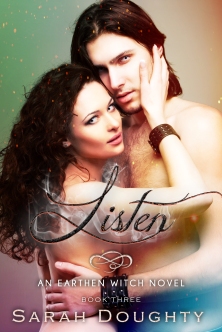 When vampires Liam and Jon go missing, it’s up to Aisling Green and her friends to find them, but doing so and surviving what awaits won’t be easy.

Battling against things she cannot fight isn’t something Earthen witch Aisling Green is used to, but she must act quickly and outsmart the one that wants her dead and save the lives of her friends before it’s too late.

As they follow the trail, they rescue a most unlikely person, and uncover a deeper, more sinister plot. With the lives of the two vampires on the line, they must fight for their lives, try to rescue their friends, and stop the evil plans. In the face of so much danger and uncertainty, they are forced to go to war and make a discovery that will change everything. The question then becomes at what price will they be forced to pay to survive?

Listen is the third book in the Earthen Witch Series by Sarah Doughty. At first I was a little nervous to plunge into a series without reading the previous novels, normally, I would like to read the series in sequence, but Sarah Doughty did a wonderful job of providing ample backstory for the details of the novel to make sense, while still leaving enough unsaid to want to go back and read the previous novels.

The story follows Earthen Witch, Aisling Green and her band of companions as they attempt to save some their own from the clutches of the Voodoo Queen of New Orleans. The story is fast-paced and full of action. There were lots of fun and interesting characters in the book, everything from vampires to ghouls, sphinxes to pixies, and even an appearance from a well-known literary character that I found both clever and intriguing.  The Earthen Witch world is a vivid and rich one. I enjoyed learning about the powers and abilities of the characters and the ways they interacted with each other. Sarah’s writing style was easy to follow and the description was enough to set the scene without burdening the reader with unneeded detail.

If you enjoy books like Charlaine Harris’ Sookie Stackhouse Series you will love the Earthen Witch Series, but do keep in mind that this series isn’t targeted at the YA audience and contains more adult themes.

You can find more information about Sarah and her books at these links.
Smashwords Profile
Goodreads
Website/Blog