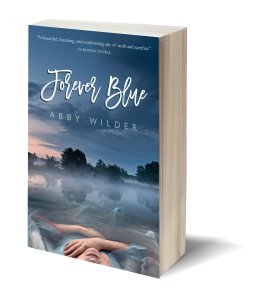 I broke the surface and gulped in air, running my hands over my face to push the water away. A raindrop splattered on my cheek. He did not rise. Seven more raindrops in quick succession splattered against my skin. And still, he did not rise. The heavens opened and rain fell like a sheet, blanketing me, cutting me off from the rest of the world.
I thought it was the end of everything.

But I was wrong.

Brothers, Ruben and Judah Mitchell, used to be close, but that was before they met Cara Armistead. Once she moved in next door, the brothers grew further and further apart until the tension between them led to an event which left one dead and the other branded by the aftermath.

One year later, after the death of her baby brother destroyed her family, Lennon Donnelly has moved back to her home town of Puruwai. While visiting the cemetery, she finds a boy sitting on a gravestone, a boy with secrets in his past, but someone who finally sees her. Accused by the town as a killer, he reaches out to Lennon, but as their relationship deepens, the events of the year before present themselves in a way no one could have imagined.

In this compelling romantic mystery, Forever Blue tells of the intertwining relationships of Lennon, Ruben, Judah and Cara. Spanning over two years, Abby Wilder creates a story of intrigue and suspicion that will haunt you long after you turn the final page.

Order from Amazon
Read an excerpt

What people are saying about Forever Blue . . .

“In Forever Blue, author Abby Wilder masterfully weaves a delightful tale of mystery that deals with vulnerabilities and eventualities. And this makes her main characters – Lennon, Cara, Ruben and Judah – vivid, colorful and sympathetic so that we tend to hold our breaths as they are driven to their inevitable fates. Forever Blue is a delicately surprising piece of literary work. It is a gorgeous mixture of mystery and romance that is both melancholic and elusive. In the end, it feels like we are presented with a picture of something that may or may not exist. And this makes the novel an unforgettable experience. Abby Wilder is definitely an author to watch out for!”
– Readers’ Favorite ★ ★ ★ ★ ★

“This book is devourable. Chapter point of views switch between four characters, flicking between present, future, and the past tense in such a way that we are left in no doubt of the Author’s expertise. We receive information to the buried truth like puzzle pieces, slowly seeing the bigger picture. Abby Wilder’s bravery in writing such a story speaks tellingly of her confidence in the craft and is to be commended. The story can be read as a stand-alone, though the reader can see where a sequel would arise from. There are several hooks which build in ‘eyes glued to page’ fashion, until only a horrified wonderment is left in their wake. Once the cover is closed, the reader can expect to reflect back on the story in heartache, shock, and haunted yearning.”
– YA Books Central ★ ★ ★ ★ ★

“Have you ever watched a horror film then straight after put something light and fun on the TV because the movie scared you? Forever Blue gave me similar feels. I read the last page and I knew I couldn’t read anything which wasn’t light and cute for a while. I was taken on a journey I didn’t expect but very much loved. And at the end, I thought I had that figured out, too. I didn’t. That got me the most.”
– Once Upon A Twilight ★ ★ ★ ★ ★